Why Buy a Laguiole Wine opener other another Corkscrew Styles?

Appreciating wine is not just about taste, it’s about a full experience.
For many people that includes something as seemingly trivial as how you open a wine bottle.

There are quite a few unique wine openers available these days, but for many waiters, sommeliers and wine fans using the wine corkscrew is still the most classy and even the most practical way.

So why choose a fancy wine opener like the wine corkscrew (which is also known as the waiter’s corkscrew, the waiter’s friend or even the sommelier knife)?
The simple answer is that it’s easy to use after a bit of practice, and there’s not much fuss to it - it just works. The alternatives tend to be somewhat more difficult to deal with or just plain more trouble than they are worth.

Take, for example, the twist and pull corkscrew. If you own a Swiss Army knife, then that corkscrew thingy included works much the same way. You just pull it out, twist the corkscrew into the cork and use brute force to pull the corkscrew from the bottle. This can get a bit messy, and you may have to be a world class body builder to get the darn cork out of the bottle.

Then there’s the modern electric wine opener, which is absolutely easy to use. But admittedly it’s loud, annoying and just a bit tacky - it doesn't have the panache an expensive bottle of wine deserves; it’s just so inelegant to use. Granted, an electric opener can work... until it breaks down—which is going to be soon, given the trend for planned obsolescence in the appliance industry.

There are other types as well, such as the “Ah So” wine openers which are difficult to use while the winged butterfly screws can be unreliable and shred even the best corks.

Read some wine opener reviews and pretty soon you’ll also come to the conclusion that what you need if you have the budget is to just get a nice double hinged wine key that works well even for amateurs.

With wine keys, you do get a lot of choices. Some are quite cheap at just 10 Euros or so, but even those who prefer to bargain hunt admit they break easily, which is why you need to buy a lot so you have a replacement at hand. But most of us object to a 10 Euros opener because they look and feel cheap, and that in turn cheapens the wine experience.

How to Use a Waiters Style Corkscrew

It’s easy enough to learn how to use a wine key, but you will still need a bit of practice using the particular model of waiter corkscrew you bought. But at least a high-quality waiters wine key does have some inherent advantages.

For one, the best waiters corkscrew already has everything you need. It has a serrated knife which you use to cut the foil away. The build should be robust, so it can last for many years. It feels great in your hands, it looks stylish, and it shouldn’t take up too much space. It doesn’t take much force to pull off the cork, and then you’re done. No fuss, no muss.

The Key Elements of a Good Wine Key

What Brand Should You Buy?

If you tend to buy wine regardless of the cost of the bottle, then that attitude should extend to your wine key as well. And if money is no object, then the Laguiole wine opener is your best option. It’s like the Bugatti or the Lamborghini of the vintner wine opener industry.

First things first: if you want to buy a Laguiole corkscrew you’ll need to know how to pronounce it. Officially, it’s supposed to be Lah-Yole, but most French folks just say La-gwee-ole. And it’s not a brand name really. Laguiole France is just a town in the Aubrac Mountains. This (along with Theirs, France) is where they make these majestic wine keys.

In general, you have two options. The first is the traditional Chateau Laguiole corkscrew. The classic design has the bottle opener in the boot lever, and the foil cutter knife is serrated. The corkscrew is grooved so you can insert it more easily.

Produced in Thiers, France, it bears the traditional Laguiole logo of a bee. One story has it that it’s not a bee but a fly, to symbolize that annoying problem that comes with having too many cows in the area. The other story (which is more popular among the locals) says that the bee is actually Napoleon’s official seal, offered to the town in recognition of the courage demonstrated by the soldiers from Laguiole.

The other option is the more modern Laguiole corkscrew, which was introduced in 1995 and made in the town of Laguiole. It’s even produced in a factory designed by that modern master Philippe Starck. The foil cutter is not just serrated but also radiused. The corkscrew is also grooved. It’s a rather minimalist design, and the bottle opener is part of the foil cutter. For many, it feels smoother and more solid when you wield it.

There’s a third option, but it’s not a real option at all. You can buy a fake Laguiole wine key made in China or Pakistan, and that will only cost you 40 Euros or so instead of the usual 100 Euros plus. It’s essentially a cheap metal corkscrew with a couple of chunks of wood on the side.

So if you want to avoid the fakes, you better take care choosing where to buy a wine opener. Your best bet is a reputable wine dealer which is the case with Laguiole french knives.

How Can You Tell a Real Laguiole Wine Opener from a Fake?

Unfortunately there are many sellers trying to mislead buyers into purchasing low quality wine keys labeled as Laguiole wine openers. So how in the world do you tell if the one you have your eye on is a true Laguiole or a fake?

At first glance a good indicator is price. These hand made wine openers just don't sell for under 100 Euros (the lowest I have seen is around 150 Euros) anything priced too low is a big tip off. That being said there is nothing stopping someone overcharging for an inferior crafted wine key.

Another good test is the heft, a real Laguiole can run up to 4.5 ounces so there is a definite "good quality feel". Granted when buying online it isn't possible to test the weight, unless the seller states the shipping weight, but that information is notoriously incorrect even on a well established online merchant like Amazon.

The three big houses (or makers) are Laguiole french knives, Forge de Laguiole and Chateau Laguiole. So look for distinct markings from these manufacturers, ie... the "bee". Finding a seller that ship the item in an official leather pouch with a certificate of authenticity is also a good idea when buying a Laguiole.

For those who don’t care about style, function is crucial, and a wine key has proven itself in this regard for more than a hundred years. It will open just about any wine bottle for you easily enough, and you only need a little bit of practice to do it smoothly.

A true wine key, however, is not just about function. It’s also about style. When you’re entertaining guests and you’re dressed to the nines, simply taking out a cheap Swiss Army knife just won’t cut it. You need a Laguiole wine key so you open a wine bottle clean, you look good doing it, and you don’t have to worry about broken bottles, corks, or wine openers. It’s the perfect merging of function and style. 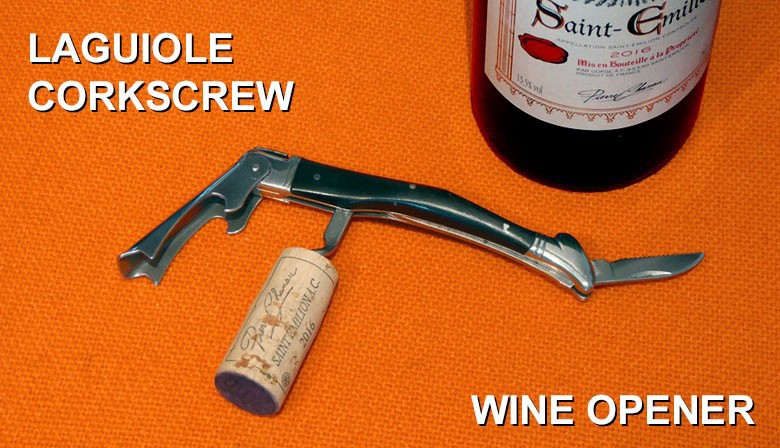